Chris M.
Just turned 30, ran a marathon, and completed my MBA. Heading to Deloitte & Touche working in their Enterprise Risk Services practice. Until then, I'm continuing to run, bike, and surf my way through the next couple of months.

Pictures of the Finished Product 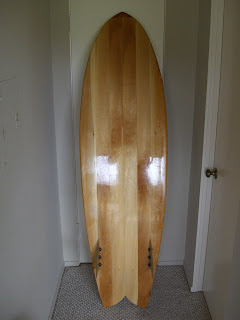 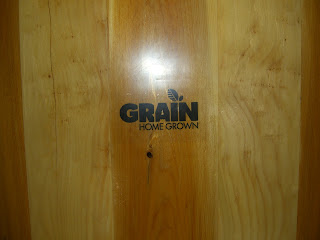 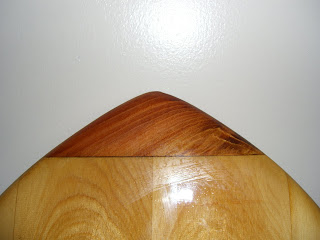 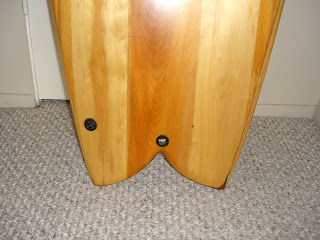 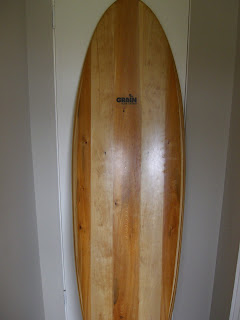 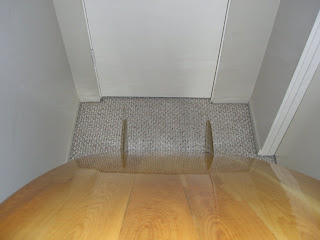 So I have been delinquent in posting the pics from the finished product. Essentially, I took my sweet time getting those last few coats done. I glassed it, varnished it, and polished it over the last several months (about 1 coat per side per weekend). Without further delay, here are pictures from that process.
Posted by Chris M. at 11:11 AM 30 comments:

After a long delay

So, unfortunately life caught up with me. I was one coat of resin from being finished. Unfortunately, there was one area near the tail that I was not thrilled with as well as some area around the fin plugs. I was leaving for training at my new job the next day. I decided it was more important to fix the problems and than to get finished before I left, so I applied some resin to the parts I needed to fix and called it a summer. That was three weeks ago. Since then, I've survived the hustle and bustle of Los Angeles for a week, visit San Jose and finally spent the last two weeks in the hottest place on earth, Scottsdale Arizona. I plan to finish up the board in the next week and will be posting some pictures soon.
Posted by Chris M. at 9:18 AM No comments: 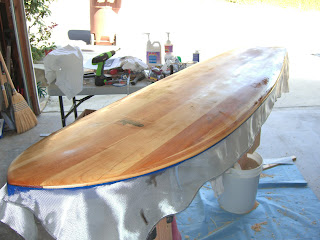 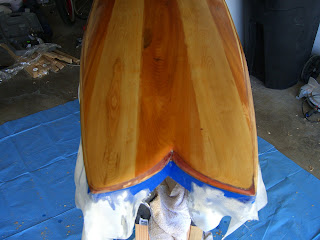 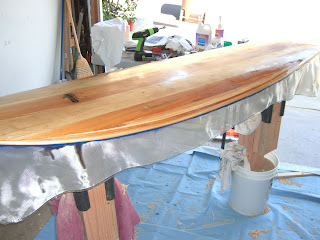 The shaping is complete and I put the first coat of glass on. It's amazing how much the grain pops out once you get the glass on. The pictures are of the first coat. I'll post some of the hot coat tonight. Two things that I did that were recommended by Brad at Grain Surfboards:

Before glassing, I filled in some valleys on the rail of the board. There were a few places where sanding pulled away parts of the bead and cove strip and/or I failed to get a good clamp on. I taped around these areas and filled them in with epoxy. This was a good way to get experience mixing and applying the epoxy in a small enough area that it wouldn't mess with the whole board. After an hour or two I then began the rest of the board. Brad suggested to let it harded and then sand it, but I waited just long enough for it to stay in the crack when I put it back to horizontal so that it would bond to the next coat of glass. It seemed to work.

Second, I had a few dings on the top of the board. Rather than sanding these smooth, I put epoxy on them first then laid the glass over top, just like you do with the grain surfboard graphic (or your own depending on what you do). This ensure there is enough epoxy to fill the ding and bond with the fiberglass. Otherwise, enough epoxy may not drip through the glass and you are left with either a dent or a white spot. It should be noted that this method does allow you to see the ding. It shows a different wood color/grain when you follow this method. However, I feel it gives the board some character. Just like an antique piece of furniture, the many dings, dents and patches I have on the board add to the character and make it evident that this was a real project, something I created in my garage and not something pressed out by a machine in China. I'm thrilled with the results.
Posted by Chris M. at 9:48 AM 4 comments: 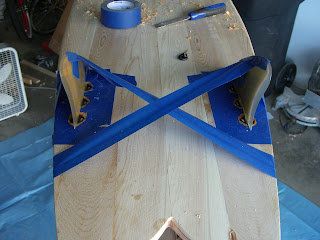 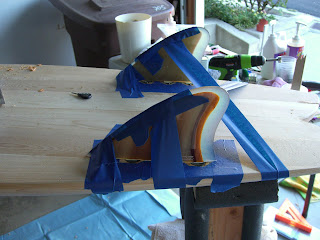 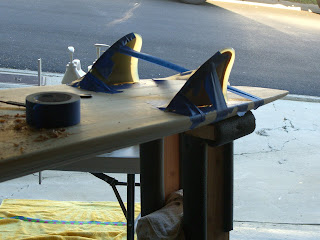 There isn't much to say in this post, I'm mainly just adding pictures. Finished up the bulk of the shaping and added the fin plugs. It was just a matter of drilling three 1 inch holes on each side. I was thankful that my method for gluing in the blocking worked as all the holes I drilled found solid wood inside the board. I set them in and used epoxy to glue them in solid. The one mistake I made was that I put too much epoxy in the hole. When I fit the plugs in the epoxy pushed out and went all over. I was scrambling to wipe up epoxy and make sure that I didn't end up gluing the fins into the plugs or epoxying over the fin screws. Once the epoxy had hardened it took a few wiggles and a sharp box cutter to break the fin free but nothing a tad bit of sanding won't clean up. I was happy with the results. Next step is putting on the top coat of glass.
Posted by Chris M. at 9:05 AM 1 comment: 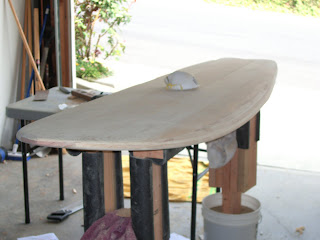 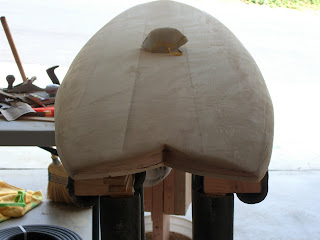 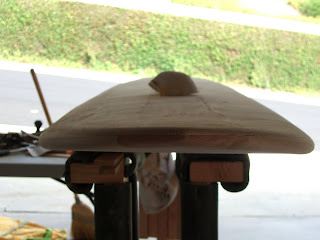 Here are just some pictures from the new shaping stands. Thanks to Surfersteve.com for the rough plans I used. I Just cut the 2x6's that I used for the rocker table to make the stands. All that sanding is a lot more work than I expected, but then again I am proceeding cautiously using mostly block sander. I've become better with block plane, but I still have trouble in some spots with it causing chips. I don't know if this is because the blade is getting dull or if I need to move in a different direction relative to the grain of the wood. Anyways, I pretty excited about how the board is turning out so far. You can see from the pictures there is still a decent amount of shaping because you can still see where the board is uneven and of varying thicknesses.

I started off thinking I was going to devise some elaborate system of measurements to make sure everything was the same all the way around, but I've found that my eye is treating much better than most of my measurements. Once a portion gets shaped the measurements change and I ended up having to re-measure so that lasted about 10 mins. I have made marks however of points where I want the shape of the rail to change so that that they match on both sides roughly.
Posted by Chris M. at 9:18 AM 6 comments: 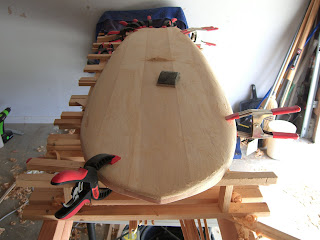 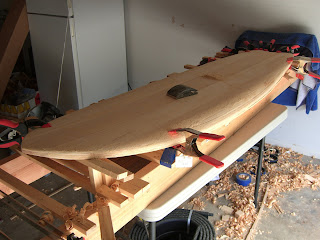 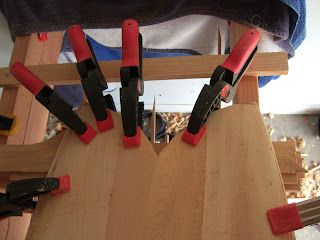 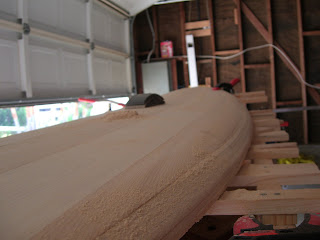 So today was a breakthrough. I took off all the clamps and began the shaping process. My goal when I finished today was just to get everything trimmed up and get a rough sand on it to remove excess glue, bumps, gaps, etc...I first trimmed the top and bottom planks using a jigsaw. This was a somewhat nerve racking experience when trimming the top plank since I was holding the saw at a weird angle and trying to keep it from eating into the rail. I erred on the side of leaving too much material. I followed this up using the hand plane to remove most of the remaining material on the top planks until they were close to the rail strips. The bottom planks I trimmed flush with the rail.

It is difficult to tell where to stop when shaping the top planks to meet the rail. There ends up being a little gap as you get closer to the rail. I was concerned because it was hard to tell if I just didn't glue well enough and this was an area that pulled away, or if I just needed to sand some more. In the end, I think I did a little of both.

I did have some areas where it was obvious I did a crappy job of clamping. This was mainly due to running out of clamps and using the PVC pipe clamps on the tail. Many of them had become stretched out and just didn't have the pressure I wanted. You can notice in the picture there are clamps holding the tail together since I decided to squeeze more glue into the gap and re-clamp it for the night.

Once every thing was smooth, I stepped back and smiled. It finally looked like a surfboard. Damn that is going to be fun to ride.

Good news, most of the split in the top planks was removed when I shaped everything down. It split where the excess hung over. There is a slight mark towards the nose where the glue is filling a tiny gap, but you can barely notice.

Next I'll dismantle the rocker table and build it into a shaping stand to shape the rails and then to glass the board. I can almost see the finish line.
Posted by Chris M. at 5:10 PM 2 comments:

Gluing the top planks on 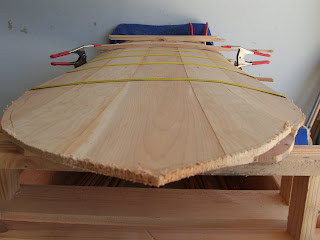 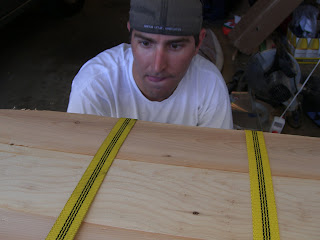 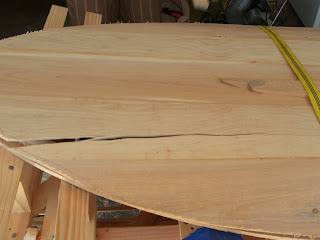 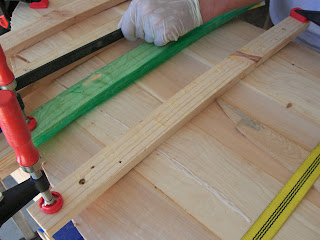 I measured out the fin blocking and glued everything in place. I found it much easier to visualize the placement having the fins in my hand. I just measured the distance from the tail and the distance from centerline and then placed the fin in that spot. I traced around the tabs that will fit into the board and then used a compass to draw 1-inch circles where the blocks need to be. I drilled a small hole in the center of where each plug will go and used this as my reference. Then on the inside I drew a cross at each hole and centered the blocks onto the cross. It should guarantee that when I drill the plugs they hit directly in the middle of the backing blocks.

Next came gluing the the top planks. I first trimmed a little more of the top planks down to make it match the outline of the board better. I then proceeded to glue and clamp the top planks on according to directions.

On a side note, the 5200 I was using on the frame exploded during this processes. Apparently it had hardened somewhat inside the tube. I kept squeezing the caulking gun but was only getting a dribble of adhesive. So I squeezed harder, so hard that 5200 blew out the back of the caulking gun. Needless to say the rest of the process was a mess. I ended up using a kind of spackle method with a paint stick and the remnants of the 5200 that were splattered in the barrell of the caulk gun. Since it was a lost cause at the end, I'm glad I bought the $4 version. I wish I could say the same about my flip flops :(

I also ended up splitting the top planks as I began to clamp them down. I think I probably split the top planks a little using the jigsaw to trim the planks and torturing them into place just made it much worse. After several minutes of major panic, I got everything down, was able to put a bar clamp on, fill the split with glue and pull it back together.

I also had difficulty with my tie-down clamp system I devised for the bottom planks. The straps pulled down on the edges, eliminating the need to use extra clamps and shims but it also pulled the edges together making the center want to bow upwards away from the frame. This system also probably contributed to the splitting problem. If I had to go back and do it again, I think I would probably do it a little differently. I might still use the straps, but I would run strapping across the top like I did earlier gluing the frame to the bottom planks. Everything glued solid, though it feels like there is one spot towards the front that is a little soft. Since I won't really be standing there it shouldn't be a big deal, fingers crossed.
Posted by Chris M. at 2:13 PM No comments: